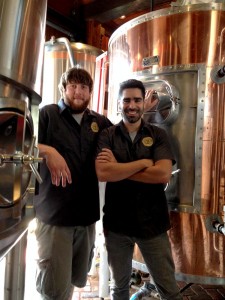 Beer, like travel, should be an experience. It should tingle and excite all of your senses. Flossmoor Station Restaurant & Brewery's new Brew Master, Eymard Freire, is a true believer of this thought and he's brewing beer to ensure you enjoy your experience. He began two months ago and every day Eymard finds it easy to take the Metra Electric District train from Downtown Chicago to the Flosssmoor Station for work. He then turns into a mad scientist adding pomegranate tea to the strong Belgian beer, molasses to the Pullman Brown Ale and orange blossom honey to the Gandy Dancer Honey Lager. Gandy Dancer used to be an ale, but he wanted a more subtle and fine flavor to enhance the honey taste. He uses over 120 pounds of orange blossom honey and it tastes amazing!

When speaking with Mug Club Members Jerry and Nevin, they really like Eymard's new brewing methods. Obviously, since they're Flossmoor Station Brewery Mug Club Members, they've always liked the beer, but they like how Eymard is, "more involved with customers and wants to know what we think," said Jerry. 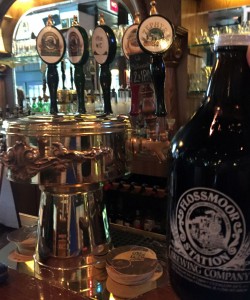 Even a regular customer to Flossmoor Station Restaurant, Paulette, admitted she couldn't resist Eymard's charm and the taste of the beer she sampled. She loves the food at Flossmoor Station Restaurant and Brewery, but planned on ordering a cocktail. That is until Eymard let her sample One Way Ticket, a Fall Seasonal Strong Belgian Ale brewed with pomegranate tea. She admitted before sampling the beer that she does not like beer and usually never orders it. After she sampled One Way Ticket, she ordered a glass and was warned to be cautious since this beer is extremely refreshing, but has a 7.7 alcohol percentage.

Eymard anticipates converting a lot of non-beer drinkers to the beer side by making it fun and exciting. Sour beers are currently fermenting in barrels preparing to excite your taste buds. He's changing the Pullman Brown recipe to be more brown instead of a dark black and it will have some oak and vanilla flavors with a slight tartness. He looks forward to future collaborative beers with other breweries and brew masters. He has already collaborated for this year's Festbier with John Hannafan from Siebel Institute of Technology. He wants to start planning future release parties for rare and fun beers. There will be more fruit beers that are blended with their Station Master Wheat and when the season is right, he plans to put real blueberries in the beer. Find them on Facebook, Twitter, Instagram and FlossmoorStation.com for updates, release parties of rare beers and more information. Make certain to tag your pictures on Instagram and Twitter with #ChicagoSouthland.