Honor the Dream in Chicago Southland

"I have a dream that one day this nation will rise up and live out the true meaning of its creed: 'We hold these truths to be self-evident, that all men are created equal.'"

On January 18th, celebrate Love, Peace and Unity at South Suburban College in South Holland with the coordinators of the Thornton Township at the Martin Luther King Jr. Celebration. Reverend Derrick B. Wells will be the keynote speaker at this free event and there will be plenty of delicious refreshments. It will feature performances by students from Thornton Township High School District 205. Take this opportunity to bring the kids to talk about this great man and message. The doors open at 9AM and the program begins at 10AM. 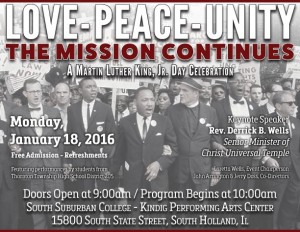 After the celebration at South Holland, head over to Nathan Manilow Sculpture Park at Governors State University located in University Park. While there are 29 master works for public viewing, one sculpture you should look at first on January 18th is the "Throne (for Dr. Martin Luther King Jr.)" by Artist Ted Sitting Crow Garner. "Throne" was created as the result of a grant provided by the city of Atlanta, Georgia. It was conceived and built for the 39th Annual Arts Festival of Atlanta and was originally installed in Piedmont Park, less than three miles from the civil rights leader's birthplace on Auburn Avenue. It is now a permanent sculpture and located near Nathan Manilow Sculpture Park's Family Development Center and was made to be sat and played on. 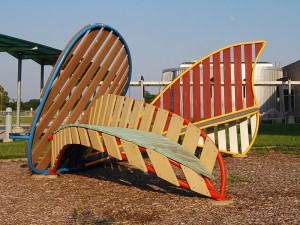 Garner's large scale outdoor sculptures often incorporate the sinuous line of shaped steel tubing seen in this piece. The artist's multi-hued color scheme reflects King's dream of a United States where children of all ethnic backgrounds could grow up with the same opportunities for social and career advancement. When viewed from the southeast, an eagle's beak and head are clearly visible, formed by the juxtaposition of the green and brown sections. From the southwest, a rampant eagle can be discerned, with the green portion framed by wing forms. The eagle's importance to Garner derives from his Native American Indian heritage.

While at Nathan Manilow Sulpture Park, take a look at the art of famous sculptors Richard Hunt, Martin Puryear and Chakaia Booker.

A native Chicagoan, Hunt's career has spanned five decades. His stature among American sculptors has been recognized by numerous awards. Hunt has two pieces at Nathan Manilow with Large Planar Hybrid and Outgrown Pyramid II. 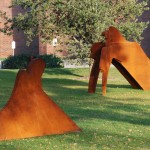 The two sculptures have recently been refurbished and moved to a new location in front of the school. Large Planar Hybrid reflects Hunt's unique vision and mature style. He employs bird-like forms in reference to mythological themes, such as Icarus and the individual freedom which birds represent and their resonance with the African-American experience. The viewer's understanding of this richly rewarding work unfolds over time as position, light and seasons shift. Outgrown Pyramid II has combined elements of biomorphic and geometric abstraction. However, unlike Large Planar Hybrid, which provides the viewer with images of birds, this earlier work seeks a purely formal resolution between the sweeping steel wave cresting the work and the immovable stability of the pyramid form below. 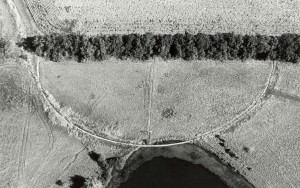 Martin Puryear's Bodark Arc is an example of Land Art, so large it can be fully appreciated only by viewing from the air. Puryear orchestrates landscape and scale along with personal and cultural references to offer a retreat from our daily activity. You can also see more of Puryear's work at the Art Institute of Chicago "Martin Puryear: Multiple Dimensions" exhibit on display from February 5th - May 3rd, 2016. 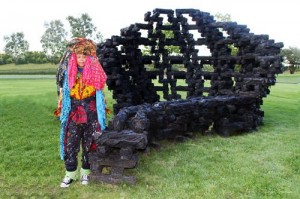 Find serendipity at Artist Chakaia Booker's Solo Exhibition Series, which will be on display until October 31, 2016. Throughout her career, Booker has explored the expressive possibilities of unusual materials. She slices and folds tires into small teardrop and tray shapes or diamonds, then attaches dozen of identical pieces onto the armature to make rhythmic patterns and textures. At Nathan Manilow Sculpture Park, there are three outdoor pieces as part of her exhibit. Once viewed from above, Serendipity, the earliest piece, the meaning becomes more clear as it looks like a question mark. Booker mentioned in the catalog for her 2004 show Jersey Ride, that the word serendipity "is about finding something accidentally and then having it turn into something valuable." Meeting Ends is a pedestal sculpture that suggests a traditional ceremonial staff. Visible across the lake is What's Not, a frame shaped piece on steel legs that connects chronologially with Booker's 2008-09 exhibition of ten outdoor sculptures in Indianapolis, IN.

If you're traveling on Interstate 57, notice the signs dedicated to the Tuskegee Airmen. In 2012, the State of Illinois dedicated the Tuskegee Airmen Memorial Trail along the stretch of Interstate 57 between Exit 339 at Sauk Trail and Exit 358 at Wentworth Avenue in Chicago. Explain to your kids about the dedication of the Tuskegee Airmen's commitment to our country and their important place in African-American History. As mentioned in this article by Gregory Tejeda of the NWI Times, "For Bev Dunjill, the fact that officials gathered peacefully...to honor black World War II Army Air Corps pilots reflects societal changes in the past six decades."
We Apologize, The following error has occurred:
Detail: Could not find the included template /includes/none.

Note: If you wish to use an absolute template path (for example, template="/mypath/index.cfm") with CFINCLUDE, you must create a mapping for the path using the ColdFusion Administrator. Or, you can use per-application settings to specify mappings specific to this application by specifying a mappings struct to THIS.mappings in Application.cfc.
Using relative paths (for example, template="index.cfm" or template="../index.cfm") does not require the creation of any special mappings. It is therefore recommended that you use relative paths with CFINCLUDE whenever possible.