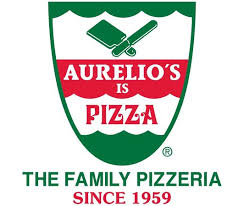 After attending a mid-day big band concert in Park Forest with my parents and a longtime family friend, we decided to make a stop for lunch. Our friend, Nola, suggested Aurelio's in Homewood. It had been a long time since I'd been to that location and I was more than happy to head there for some pizza.

While Chicago-style pizza is touted as the deep dish version stuffed with cheese and swimming in sauce, we eat our share of thin crust here in Chicagoland. And Aurelio’s has a distinct type of thin crust that I haven’t found in other pizzerias along with a generous amount of toppings and a slightly-blistered layer of cheese. If you set a dozen pizzas in front of me from different restaurants, I’m 100% sure I could pick out the one from Aurelio’s.

Aurelio’s has quite a history in the area. It dates back to 1959 and is the oldest Chicago pizza franchise restaurant. It started as a small storefront on Ridge Road in Homewood and has grown to about 40 locations in six different states. In the 1970s, it relocated a couple blocks away to a 16,000-square-foot location on Harwood Avenue.

I’ve been to several of the other locations, but Homewood is the only one where you can request that your pizza be made in the “old oven.” I’m not quite sure how old it is, but I suspect it came from the original building. Somehow that delicious crust seems just a tad crispier and tastes even better when it comes out of that “old oven”.

If you are a pizza lover, this is a place that deserves a spot on your foodie bucket list. :) And don't forget to make your request for an "old oven" pizza.